Opening of the solo exhibition of the Austrian artist Soshana on 19 January represents the first in a series of cultural events to mark the 125th anniversary of setting up the first counter at the National Bank of Serbia.

This exhibition was organized at the initiative of a private gallery Dali Art with the support of the Austrian Cultural Forum, an Austrian government agency for promotion of international cultural exchange.

His Excellency the Ambassador of Austria, Mr. Clemens Koja made the opening speech and pointed to specific features and the significance of Soshana’s artistic achievement. Visitors were then addressed by His Excellency Minister of Culture of the Republic of Serbia, Mr. Nebojsa Bradic who said that by hosting this international exhibition, the Exhibition Hall in the NBS building has become a guardian of the cultural life of the Serbian capital now that six big museums in Belgrade are undergoing extensive reconstruction.

Soshana was born as Susanne Schüler in Vienna on 1 September 1927 to a middle-class Jewish family. She took her artistic name Soshana, which translates as „Lily“ in the Hebrew language, after her first big exhibition in Havana in 1948. She has been known as a cosmopolitan and a great artist who lived and created all across the globe, and as a contemporary and a friend to the giants of the 20th century art world. Fleeing Western civilization and seeking inspiration, she left Paris to travel through Mexico, China, India and Japan and study Eastern culture and art techniques – aquarelle and calligraphy. During the 1970s she lived in New York, the new world art capital, and made friends with the leading artists of the New York art scene. She returned to Austria in 1985 where she still lives.

Her paintings are exhibited in modern art museums of the world’s major cities and are part of the most valuable art collections, such as that of the Austrian central bank and the Guggenheim Collection. 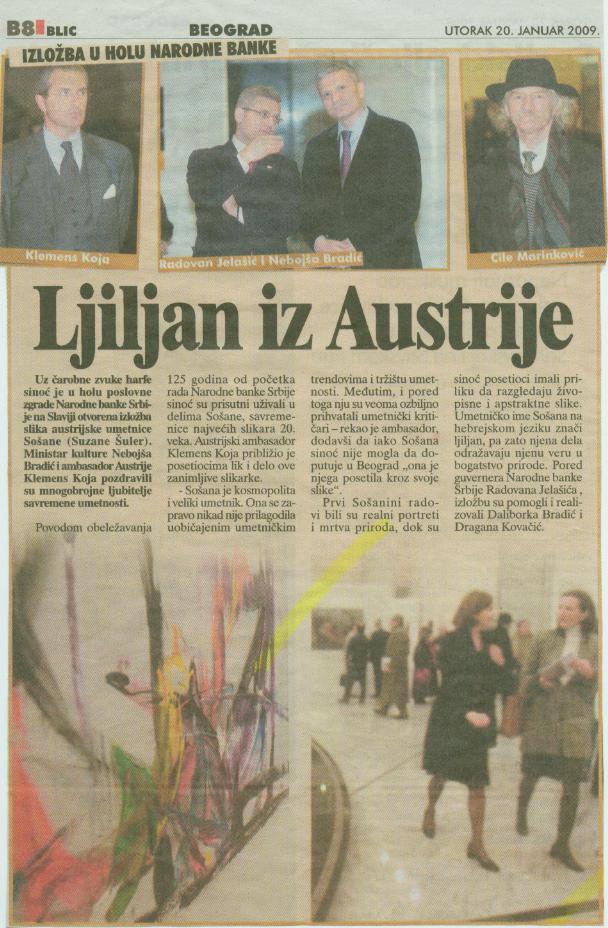